So this is so absolutely crazy…

This time last week we were at the trampoline park celebrating Josh, our eldest sons fourth birthday…

This week, I am busy trying to sort all the final touches on this Why Dads Babywear project to become a FREAKING REAL LIFE BOOK!

I am an independent Sling and Carrier Consultant, I trained through Slingababy Training School on the first ever Babywearing consultant course to be held on New Zealand soil! Lorette came out to Christchurch in New Zealand and 21 of trained together, taking the total number of consultants around New Zealand from less than 10 (who all had to go overseas to get trained) to almost 30.

Paid support services in the babywearing world are a really new development… If you want a good comparison, think about how much La Leache Leauge has done to support breastfeeding mothers all over the world for many, many years run by hard working, dedicated volunteers. Yet Lactation Consultants are something that has only been in New Zealand at least in the last 15 odd years.

This industry is very much in its infancy. The broad recognition of just how beneficial these parenting tools can be for all of our families is not yet mainstream again in our current society. Furthermore, it is incredibly common that I hear, “I’m just going to let my wife worry about that stuff” or “I am really hoping my husband will want to use the carrier too but I will have to try and convince him first…”

I had this vision of more expectant fathers coming along to my workshops.. I ranted and raved at James about how I think it might help with the struggle a lot of Dads feel when a new baby arrives. Perinatal mental distress well and truly affects both men and women and I think that maybe giving Dads more practical “roles” and suggestions might help.

I remember as a new mum for the first time myself, I really struggled. With recovering from birth, trying to get my head around breastfeeding and all the issues we had with that, with lack of sleep… He so desperately wanted to help often and he didn’t really know what his role in that could be.

I spent hours pumping breastmilk so James could give Josh a bottle as the feeding seemed like one of the key things I had available to share with him.. What a pain in the arse that was and why do we tend to equate that with the way new Dads have to bond with their babies?! I still hear it often talking with pregnant mums…

If we could give Dads the role of the “guardian of the knowledge” about slings and carriers for their families and empowered them to learn about more options, to try some things out, to learn how to use them with dolls and about safety and all that jazz I share and do with Mums at my workshops, maybe that would take a bit of the load of both people about to embark on this life altering shift together.

I remember so many times when James would get in the door from work when Josh was a newborn and I would be a crying mess in a rocking chair holding this baby in my arms, frazzled and strung out… He would just give me this look, like, “what am I meant to do?” and also a bit of “wtf is this crazy lady and what happened to that chick I knocked up less than a year ago?!”

If he had been empowered with information and felt confident to grab a carrier at that point, strap the baby to him and gone for a walk while I got to have a shower without anyone touching me or me freaking out that the baby was going to cry at any second, maybe that could have been a good approach to coping. It would have made him feel like he had something I could do and it would have given me a reason to hang in there until he got home from work so I could clean myself and pull my shit together.

Instead he would walk in the door, a little bit like a scared gazelle at the waterhole, not sure if it is safe or if an alligator is going to snap out of the water at any second and attack…

Don’t get me wrong, it’s not that I am saying he didn’t have cause to be scared, he sure fucking did. It’s just that it didn’t help…

We did all kinds of classes before Josh was born, like antenatal classes, breastfeeding classes, birth massage classes, first aid classes… all kinds of things that we hoped would prepare us the first time round.. Often things I dragged him to reluctantly but all had at least something in them that helped..

Do you know what I wish I had prepared myself for most though?

Carriers have literally saved our arse and our sanity sooo many times. Both of us. Not just me.

And so I had been reading and researching about perinatal depression and distress from a dads perspective, I did heaps of work and thinking and generally just lots of effort in and I had drawn up a mindmap of an outline for a infographic and a bit of a plan I hoped might help me cross that barrier a bit better.

And I took it to James and I was so chuffed with myself and I showed him, “what do you think?”

“This is good right? These are some great reasons why dads would babywear right?”

He scanned it for a second, put down the piece of paper and continued what he was doing, “hmmm” he grunted.

“I dunno.. just hmmm I guess” he replied.

“Hmmm, WHAT?!” I snapped back, I was getting really pissed off already to be honest, “what the f#ck does that mean?”

“Its just, well, it reads like a mum who is trying to write from a dads perspective…” he replied, “you know?!”

“Well that’s cause I am a mum writing from a dads perspective, I can’t become a dad can I?!? Come on man, I just spent like 8 hours trying to get my head around this, give me more, tell me what am I meant to do then?! What’s your f#cking great idea hey? Are you gonna write something?”

“Just use less words!” he snapped back, “look as a dad I don’t want to see all your graphs and shit, just give it to me short, snappy, quick, you know..?”

“I get your point James but I don’t know what words to use! I am not a Dad. You are! Why do YOU babywear?” I screamed at him.

“So they don’t run off and cause shit when I have stuff to do” he replied.

“WHAT THE F#CK DO YOU WANT ME TO DO WITH THAT JAMES? PUT IT ON A F#CKING POSTER?”

“Oh yeah you could do that, it might make a good poster..”

I stormed out. I lost my shit haha

It was like a light bulb, maybe it would be a good poster..? I wonder if I could get other “dad quotes” and do like a few of them…? I could ask around maybe, see if some other consultants or their families would be keen too? 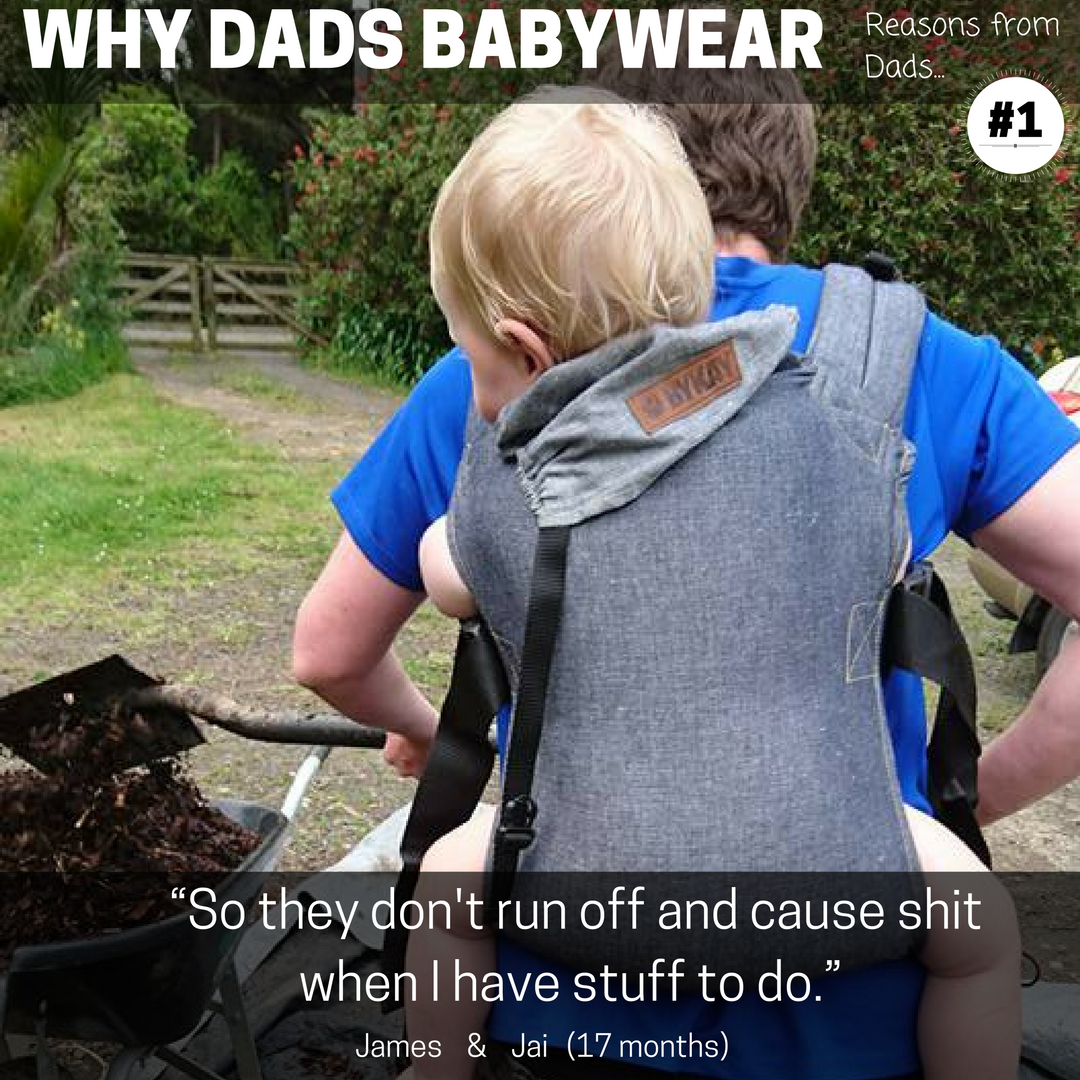 And holy moly what a ride!

Not only was he right and it did make a good poster (yep eat my words, apologize lots etc) but other people were keen to send me some pictures so I posted it to Facebook as an album. I hoped best case maybe we could get to like 30…

When we got home from the trampoline park there were already heaps of them being shared with me. I made more and more as they came and all of a sudden we were nearly at 50!

The next morning when I woke up and checked my phone while I hid from everyone with my coffee, it wouldn’t load Facebook at all.

When I turned on the laptop to check what was going on, all of these notifications where flooding in but they weren’t in English… When I tried to click on one to load it, the page refreshed, the notification counter went back to 99+ again and I couldn’t even find the notification I was just looking at any more…

“Ummm, James…” I called from down the hall, “maybe it did make a good poster… look at this…”

Another 12 hours later I was still getting flooded with them, I had already made so many! What in the world was going on….

“Babe, this rate I’m going to be making posters forever!” I said to him as I made yet another at the kitchen bench trying to also scoff my dinner and breastfeed the baby in a sling at the same time…

“Seriously?” he looked less than amused, “I did not turn down research gigs to watch the kids so you could make posters forever babe! And the point was less words! NOBODY is going to flick through 100 photos and read them all! And if you are not doing consults and workshops, how the f#ck are we going to buy extra lunch food for Playcentre next week?! I said make one poster, not forever make posters, come on babe, wrap it up. Move on.”

“Just call it 100 reasons if you think you have enough” he suggested.

Honestly I hadn’t slept more than a few hours each night in those few days. It was like a crazy high to watch the numbers and stats and shit jump and flicker around and see and receive ALL these amazing insights into these families who are just like me and the boys, lucky to have a really awesome dad in our family.

One that is hands on, that loves his kids, that views his role and modelling in their lives as just as important and equivalent (yet so, so different) to the role of the mother of their children.

Thank you so much for giving me this honour of getting to curate posters of your photos and words and families and lives. I did nothing more than make a pretty template, stick my husbands words on it and posted it to Facebook.

You guys made this a celebration of fatherhood.

Thank you for letting me be part of it.

Oh and if you haven’t already, please send us an email to whydadsbabywear@gmail.com preorders will only be shared with links on that address. It is impossible to find you all again but I am doing my damdest to try but if shot an email through I will know we haven’t missed you when we hand over that email address to someone else next week…

Just let me go make some more money first, before James steals my card again to “go buy groceries” – a line he likes to remind me often I used on him for almost five years before he got to say it back to me for the first time! (and the cheeky shit bought the most expensive f#cking vacuum cleaner in the shop, “just you know, cause I thought we needed a new one and I had your card when I was driving past the shop, you know how it is… I have to sort lunches for tomorrow…” my HUSBAND says to me with a smirk… talk about role reversal…)