We love our Natures Sway hammock, I think it is really complimentary for a babywearing family.. My boys have usually often been worn for naps and the bouncing and swaying motion of the hammock helps mimic that…

Jai in his hammock at 4 days old

It is often the only other way Jai will sleep (as opposed to strapped to me) still now at almost 11 months! While I love wearing him, if I wear him for every sleep I get touched out and sore by the end of the day.

What works for us at the moment is if usually feed and/or wear him to sleep and then transfer him into the hammock. Often he will stir as I transfer him but a bit of bouncing generally lulls him back to sleep.

When he moves, it moves along with him, much like would be the case when I am wearing him for a nap. And having the space to transfer him into after he has fallen asleep on me has worked great for our family.

It has also allowed my husband to help more with settling Jai when he does stir. When he is on a flat surface and stirs, he either wants boob or to be picked up and bounced back to sleep, in the hammock, with a “shush” and bounce, a lot of the time my husband can help settle him without me more easily. Or even Josh.. He (sometimes too enthusiastically!) loves to bounce his little brother in the hammock too.

When he was a newborn we had the stand set up in the lounge and used the door frame in our ensuite doorway, so we could move him to be close to us no matter where we are while he was sleeping. Jai is also a busy sleeper, he likes to hear noise and action, which the hammock does for us.

I mistakenly had made the assumption that the hammock was only a sleeping surface for a newborn (as an alternative to a bassinet) and when Jai was getting bigger and heavier, we tried to transition him into a bed. It was a dismal failure and much like his big brother did at his age, faced with a flat surface for nap times, it was difficult to transfer him off me once he was asleep and often he would wake very quickly. If I tried to lay with him to get him to sleep (a luxury when you also have a 3.5 year old in the house!), then often he would breastfeed for his whole nap, on the occasions I managed to sneak away, he would roll and wake himself, looking for me.

I was faced with a “wear me for every nap” situation with a 8kg six month old and touchy feely 3.5 year old, I was losing my mind having no personal space and wearing all day!
“Get the hammock back out” I said to my husband, “I’m touched out and sore!” (we hadn’t actually got as far as properly putting it away to be fair).

By this time we had taken it to Australia with us over Christmas holidays (where the helpful settling aspects were utilised by other family members at times, giving both my husband and I a break!) and added the stiffener to our set up to provide our huge bubba some more space.

When I saw Kate from Natures Sway (our paths actually first crossed when I was the Volunteer Coordinatior for a few years at West Auckland Parents Centre and had the pleasure of being involved in the mothers day basket they organise and deliver every year at Waitakere Hospital which Natures Sway kindly donate to annually) I mentioned we had tried to transition Jai out of the hammock with no luck. I explained he was so heavy and long now that it was a squeeze to fit him in and he was bottoming out the spring, no longer effectively providing that “bounce factor”.

She sent us home with a new double spring set up and a longer mattress and stiffener. It changed our hammock completely!

The double spring holds up to 25kg, when we were setting it up my husband mentioned, “Oh wow Josh, you could fit in this now!”

And sometimes I find him bouncing away in it when I’m not paying attention and Jai loses the plot about his big brother being in the only space that is entirely his. There has been so much rivalry over the hammock in our house, we actually pulled the big beautiful cot I spent hours antagonising over the choice off when pregnant for the first time, for the sole purpose of having somewhere to have a wrap hammock set up permanently (I was sick of having tantrums at dinner time because I wanted to take the wrap hammock of the dining table!).

We don’t use the hammock stand as much now days, except for sleeps outside as none of our external doorways have the right frame for the door clip. Nowadays the hammock tends to stay in the doorway to our ensuite, with a narrow thin mattress underneath.. Occasionally coming down to the laundry or entrance way door frames if he needs is unsettled and needs lots if reassuring bouncing and I am busy cooking or something (teething is a bitch isn’t it?!).

But the frame does still get used, occasionally a couple of times for the jolly jumper (Jai is very enthusiastic when placed in that thing and smashed his head on the door frame a few times before we thought to try that haha) and most recently, due to the competition over wrap hammocks, we also set up a wrap swing by tieing a wrap up on the stand! (for the record, I am not sure that these would be recommended uses by the manufacturer, just what we have done). 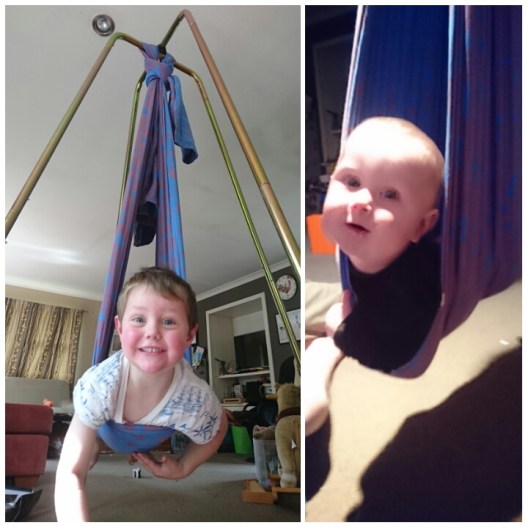 I wish we had one when Josh was a clingy baby too! 😉 I sat in a rocking chair for a large chunk of the first five months of his life with him asleep on me!

We had been raving about our awesome spot out here to the ladies at Natures Sway and given their business was “born” out of Waimauku, they thought they would come out and see it for themselves! While the were here, Jai had a nap in the native glen section of our backyard after I feed him to sleep in a wrap and then we got some photos and video and my husband and I did a video testimonial for them.

We really love their hammock and think it’s important to support local NZ businesses creating products here in NZ using New Zealand materials like wool. The hammock (while given to us by a friend we bought it for when they had finished using it haha) has been one of those essential must have items for us with a newborn.